The American Railway: The Trains, Railroads, and People Who Ran the Rails

The American Railway: The Trains, Railroads, and People Who Ran the Rails. In the 1800s the railroads changed America and America changed the world. Celebrate the men and women who ran the rails, built the trains and commanded an empire of steel.

Originally printed in 1893, this stunning reprinting of the rare classic, The American Railway, is filled with more than 200 gorgeous period illustration of locomotives, brakemen, engineers, rail service, managers and tycoons from the era. Learn how the 19th-century American railroad was constructed, managed and run to become the greatest railway in the world.

This stunning reprint is edited and designed by Mark Bussler, director of Expo: Magic of the White City and writer of Tome of Infinity, The World’s Fair of 1893 Ultra Massive Photographic Adventure, World War 1: A Dramatic Collection of Images, the Ultra Massive Video Game Console Guide series and Westinghouse. 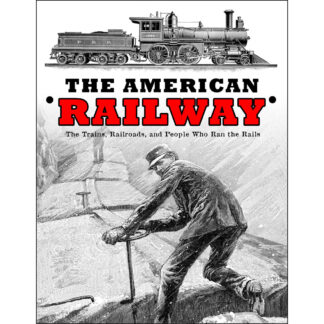 You're viewing: The American Railway: The Trains, Railroads, and People Who Ran the Rails $26.95 – $42.95
Select options