Dante Alighieri’s terrifying masterpiece enhanced with chilling imagery from the legendary artist, Gustave Doré is a sight to behold.

Written in the 14th century, Inferno gained immense popularity in the late 19th century and stirred the imagination of contemporary artists and translators from the time. Few found inspiration in such a grand way as Doré. The immensely talented French artist created a famous series of unforgettable engravings that enhance the Divine Comedy’s journey into untold depths of sorrow, pain, and madness with impeccable detail, masterful shading, imaginative landscape work, and flawless human anatomy.

Years ahead of his time, Gustave Doré’s imagery tells the story in a cinematic way, which was unusual for the time, and remains captivating today. One wonders how anyone could have possibly created the artwork for Inferno using tools from era.

Enjoy Dante’s vision of Hell and Cary’s translation while admiring more than 75 unforgettable illustrations in crisp detail. The Cary-Doré edition presents Dante’s thought-provoking look at the afterlife in a modern yet classical way that continues to enthrall audiences well into the 21st century. 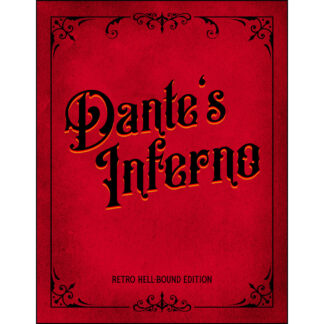