After surviving his trip to Hell, Dante’s unforgettable adventure continues to Purgatory and Paradise, as illustrated by Gustave Doré.

Gustave Doré’s artwork explodes with visions that remind the reader of Inferno’s eternal agony but then take them to a happier place. Purgatory and Paradise show the depth of Doré’s talents as heavenly scenes of grandeur erupt from the page with intricate details that can take hours to fully absorb.

Originally written in the 14th century, Dante Alighieri’s Divine Comedy consists of three parts that tell the story of Dante’s trip through the afterlife. After enduring the savage spectacle of Hell in “Inferno”, Dante continues through Purgatory to the nine celestial spheres of Heaven in Paradise.

About the Artist:
Master artist Gustave Dorè (1832-1883), known for the lavish illustrations in Dante’s Inferno, Paradise Lost, and Don Quixote, depicted the ending of Dante’s journey in a unique way that only he could. Dante and friends gaze at scenes of horror and splendor that showcase Dorè’s immense talents and mastery of human anatomy, background detail, shading, and layout.

About the Publisher:
The CGR Publishing Restoration Workshop uses a vast array of computers and digital scanners to restore, preserve, and enhance the classic works of writers and artists from the 19th century. Each new release includes display-quality covers, enlarged covers, and retro fonts. Select books include Dante’s Inferno Retro Hell-Bound Edition, Gustave Dorè’s London: A Pilgrimage, The Complete Book of Birds, A Life of George Westinghouse, The Clock Book: A Detailed Illustrated Collection of Classic Clocks, The Aeroplane Speaks, and much more. 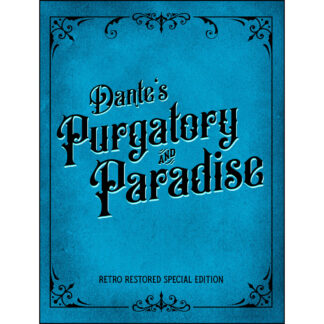