More than 400 restored and enhanced illustrations from the mind of Gustave Doré celebrate the legacy of one of history’s greatest artists.

Known for his highly detailed wood engravings and gifted sense of composition, Gustave Doré was one of the premier illustrators from the 19th century whose visual style was years ahead of his time. For the first time, a beautifully curated collection of some of his best work from eight influential books is available in one volume. Best of Gustave Doré includes images from:
– Dante’s Inferno
– Milton’s Paradise Lost
– The History of Don Quixote
– Doré’s London: A Pilgrimage
– Les Contes Drolatiques
– Dante’s Purgatory and Paradise
– Doré’s Bible Gallery
– Adventures Du Baron De Münchhausen

Page after page of Doré illustrations shows why this prolific French prodigy may be history’s most versatile artist with an unequaled range and unrestrained ability to convey hope, tragedy, passion, and agony, all with a delightfully macabre sense of humor.

Best of Gustave Dore Volume 1 contains some of his biggest, mind-bending pieces in addition to enlarged, re-scanned images of smaller cartoons and sketches from the background details of books like Doré’s London and Les Contes Dolatiques. New and old fans alike will find themselves immersed for days soaking in every detail and subtle nuance from his myriad array of masterpieces.
– 8 ½” x 11” printing
– Crisp digitally re-scanned and enhanced images
– More than 400 illustrations
– Display quality cover design
– Introduction by Mark Bussler, creator of Dante’s Inferno: The Coloring Book and Magnum Skywolf

“Born in France in 1832, Doré was considered an artistic genius at an early age who embarked on a lifetime career as a cartoonist, illustrator, painter, sculptor, and caricaturist. Wood engravings became his specialty, and he is widely known today for his illustrations in popular books such as Dante’s Inferno, Milton’s Paradise Lost, and Doré’s London: A Pilgrimage.

What makes Doré’s artwork unique is his range of talent beyond his skill as a technical illustrator. His mastery of human anatomy and background details is rivaled only by his own abilities to shift subject matters, effortlessly, from angst and pain to comic hilarity. His chilling artwork for Dante’s Inferno evokes endless, eternal suffering while his quirky, lighthearted drawings for Les Contes Drolatiques show his good sense of humor and gifted cartooning skills.”

About the Publisher:
The CGR Publishing Restoration Workshop uses a vast array of computers and digital scanners to restore, preserve, and enhance the classic works of writers and artists from the 19th century. Each new release includes display-quality covers, enlarged covers, and retro fonts. Select books include Dante’s Inferno Retro Hell-Bound Edition, Gustave Dorè’s London: A Pilgrimage, The Complete Book of Birds, A Life of George Westinghouse, The Clock Book: A Detailed Illustrated Collection of Classic Clocks, The Aeroplane Speaks, and much more. 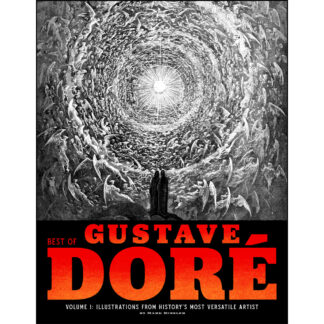