More than 100 illustrations from Gustave Doré guide readers through an epic 19th-century expedition of the scenic Pyrenees.

In 1867, the British writer Henry Blackburn teamed up with famed French artist Gustave Doré to create a beautiful profusely illustrated guide called The Pyrenees: A Description of Summer Life at French Watering Places. This rare book, one of Doré’s forgotten masterpieces, is restored, enlarged, and reprinted as a Special Edition featuring:

Take a trip back to the mid-1800s long before the television, magazines, and the Internet to discover a contemporary guidebook illustrated by one of the best artists of all time, Gustave Doré. Before photography was commonplace, Doré’s talent and imagination, combined with Blackburn’s descriptive writing, tell a story about an adventure through the historic and picturesque Pyrenees mountain range that separates France and Spain.

Blackburn said, “In illustration of the work, the publishers have been fortunate enough to obtain the drawings of an artist whose name is famous amongst us, and whose illustrations of the Pyrenean scenery are already highly esteemed in France. They are one hundred and twenty in number, and will probably be found to give, as a whole, the most perfect picture of the mountains and valleys of the Pyrenees ever presented to the English public.

In the Map which accompanies this volume, the principal routes described have been laid down; but it may be as well to state, for the information of those who are unacquainted with the country, that the district familiarly known as “the Pyrenees,” comprises but a small part of that range of mountains which divide France and Spain.”

About the Artist:
Master artist Gustave Dorè (1832-1883), known for the lavish illustrations in Dante’s Inferno, Purgatory and Paradise, Dorè’s London: A Pilgrimage, and Milton’s Paradise Lost. Dorè is regarded as one of history’s best artists, illustrators, and cartoonists. Known for his incredibly detailed work in books such as History of the Crusades, his drawings for The Pyrenees show his mastery at illustrating scenic landscapes, trees, foliage, waterfalls, and the experience of touring one of the world’s most magnificent regions.

About the Publisher:
The CGR Publishing Restoration Workshop uses a vast array of computers and digital scanners to restore, preserve, and enhance the classic works of writers and artists from the 19th century. Each new release includes display-quality covers, enlarged covers, and retro fonts. Select books include Dante’s Inferno Retro Hell-Bound Edition, Gustave Doré’s London: A Pilgrimage, The Complete Book of Birds, A Life of George Westinghouse, The Clock Book: A Detailed Illustrated Collection of Classic Clocks, The Aeroplane Speaks, and much more. 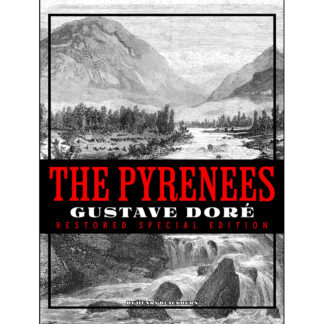