View cart “How to Grow Mushrooms: A 19th-Century Approach” has been added to your cart.
Sale!

Can a nuclear-powered supersonic helicopter from the 1980s save the future?

Relive the glory days of action-packed 1980s television with Magnum Skywolf. After a top-secret helicopter mission in Vietnam goes wrong, Captain Hunter Skywolf ends up frozen inside a glacier in Antarctica. In 2020, government scientists discover and revive him. Not having aged a day, he is a relic from another time.

Despite the nearly-fatal accident, Captain Skywolf remains the best helicopter pilot in the world, and the only person capable of flying the experimental nuclear-powered supersonic helicopter known as Magnum 9000.

Created, written, and illustrated by Mark Bussler (Ethel the Cyborg Ninja, Robot Kitten Factory, Old Timey Pictures with Silly Captions, How To Draw Digital By Mark Bussler), Magnum Skywolf drops readers into the cockpit of a supersonic helicopter that lands in a volcano with style.

Bussler’s art style is reminiscent of 1980s manga and classic comic books from back in the day. This retro floppy edition of Magnum Skywolf includes:

If you can find it, then you can read Magnum Skywolf, which brings the laughs and non-stop testosterone-fueled 1980s-style action. 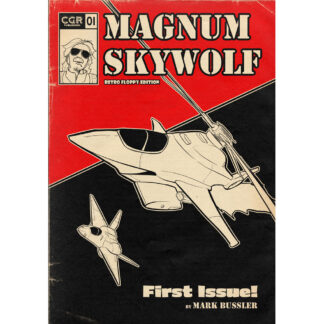