Sinking of the Titanic: The Greatest Disaster At Sea – Special Edition with Additional Photographs

A detailed and accurate account of the most awful marine disaster in history.

This stunning reprinting of the rare 1912 classic, Sinking of the Titanic and Great Sea Disasters is printed in the original font with digitally mastered photographs from pristine source material. This Special Edition includes additional photographs from contemporary newspapers and magazines to increase the readers’ immersion into one of the most dramatic events in the 20th century.

Sinking of the Titanic includes vivid firsthand accounts when the Titanic struck an iceberg on her maiden voyage in April 1912. Features additional sea disasters throughout history.

Chapter List:
First News of the Greatest Marine Disaster in History
The Most Sumptuous Palace Afloat
The Maiden Voyage of the Titanic
Some of the Notable Passengers
The Titanic Strikes and Iceberg
Women and Children First
Left To Their Fate
The Call for Help Heard
In the Drifting Life Boats
Onboard the Carpathia
Preparations On Land to Receive the Sufferers
Jack Thayer’s Own Story of the Wreck
Incidents Related by James McGough
Wireless Operator Praises Heroic Work
Story of the Steward
How the World Received the News
Bravery of the Officers and Crew
Searching for the Dead
Criticism of Ismay
The Financial Loss
Opinions of Experts
Other Great Marine Disasters
…And More 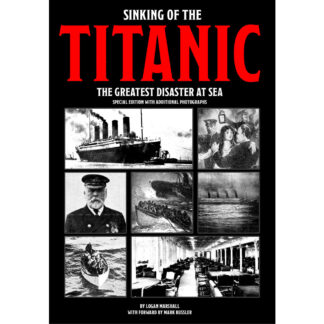 You're viewing: Sinking of the Titanic: The Greatest Disaster At Sea – Special Edition with Additional Photographs $17.05
Add to cart