A magical city sat next to the San Francisco Bay in 1915 to celebrate the construction of the Panama Canal and America’s success in the World.

Known as the Panama-Pacific International Exposition, The San Francisco World’s Fair was a massive event that entertained more than 18 million people who visited the Western United States while The Great War raged across the World in Europe. More than 20 countries participated and enthralled guests with a visionary display of palaces, technological achievements and art.

The Panama-Pacific International Exposition Company first printed this book as “The Blue Book” in 1915, a lavish celebration of the success of the fair. Restored by World’s Fair historian, Mark Bussler (Director of Expo: Magic of the White City and author of The World’s Fair of 1893 Ultra Massive Photographic Adventure Series), this massive reprinting preserves the original pictures, text, and type font while adding new spreads and modern layouts. 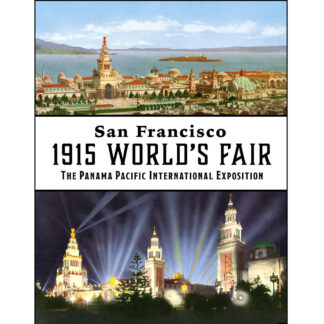