Ocean to Ocean on Horseback in 1876: A Journey Across America – Enlarged Illustrated Special Edition

Barely a decade after the American Civil War, a daring writer rode from sea to shining sea across a new country reeling from turmoil, expanding into the great unknown.

On May 9th, 1876, Captain Willard Glazier left Boston, Massachusetts, on a journey that many would have called foolhardy and suicidal. In the days long before cars, interstates, cell phones, and air travel, one man dared to ride across the country that he loved from The Atlantic to Pacific – on horseback.

Originally published in 1895, this contemporary account of Glazier’s journey tells a harrowing tale of a man and his horse named Paul Revere. He narrates every step of the way and provides fascinating commentary and descriptive accounts of many American cities as they looked in 1876.

This special edition release includes the original period type font, enlarged pages, new retro cover design, and digitally remastered images. Fans of American history and lengthy road trips are sure to be enthralled by his hastened ride across the plains, his capture by Indians, and his brutal voyage over the mountains to the gleaming Pacific Ocean and San Francisco. 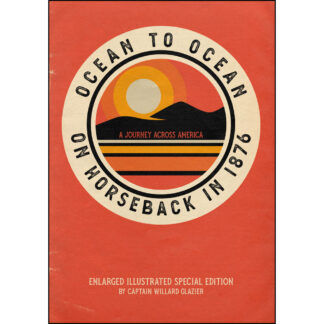 You're viewing: Ocean to Ocean on Horseback in 1876: A Journey Across America – Enlarged Illustrated Special Edition $23.70
Add to cart