Chicago 1933 World’s Fair: A Century of Progress in Photographs

A century of progress, a millennium of Chicago.

Chicago was no stranger to World’s Fairs. The Windy City hosted the great 1893 World’s Fair at the end of the 19th century, the fair which introduced the Ferris Wheel and electric lights on a grand scale to the world. Forty years later Chicago would try to one-up itself and celebrate the city’s 100 year anniversary with The Sky RIde, art deco styling, the Sinclair Dinosaurs, Hall of Science, and creative applications of lighting that stunned millions of visitors.

A Century of Progress heralded not just Chicago’s history but also the past several decades of American advancement in electricity, transportation, agriculture, science, medicine, art, movies, and architecture. It was said that “if Washington could return to our land of railroads and steamboats and airplanes and electricity and telephones and radios and the myriad products of physics and chemistry and biology and geology, he would think that by some magic he had been transported to some marvelous fairyland.”

Written and designed by filmmaker and photographer, Mark Bussler (Expo: Magic of the White City, The 1893 World’s Fair Ultra Massive Photographic Adventure Series and San Francisco 1915 World’s Fair: The Panama-Pacific International Exposition) Chicago 1933 World’s Fair: A Century of Progress in Photographs collects a wealth of stunning amateur, professional, and press photographs that chronicle this incredible event. Learn about the construction of the fair, the styling, the buildings, funding, and the fairgoers’ experience of a lifetime! 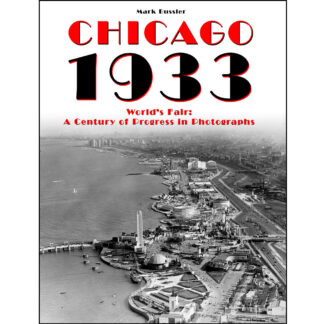