1939 New York World’s Fair: The World of Tomorrow in Photographs

While the world was falling apart, the 1939 New York World’s Fair brought us together to celebrate freedom, technology, and The World of Tomorrow.

The Futurama, the Trylon and Perisphere, the Westinghouse Time Capsule, Railroads on Parade, the Chrysler Rocketport, the Aquacade, and the world’s largest diorama: these are just a few of the things that you would have experienced at the 1939 New York World’s Fair.

From writer, director, and World’s Fair expert, Mark Bussler, this entertaining and informative book guides readers through the 1939-1940 World’s Fair held in New York City. Feel like one of the lucky fairgoers while immersed in incredible photographs and details from the Fair – many of the pictures are previously unpublished and give an on-the-ground perspective missing from most history books.

Hundreds of photographs combined with a fun and lighthearted writing style make learning about the 1939 World’s Fair fun and enjoyable for all ages.
Mark Bussler is the director of the documentary films “Expo: Magic of the White City” narrated by Gene Wilder, “A Good Time at the 1939 World’s Fair”, and “Westinghouse.” Mark wrote “The World’s Fair of 1893 Ultra Massive Photographic Adventure” series, “Chicago 1933: A Century of Progress in Photographs,” and “World War I: A Dramatic Collection of Images.” Mark is also the writer and artist of numerous comic book series, including Magnum Skywolf, Ethel the Cyborg Ninja, Robot Kitten Factory, and Omega Ronin and did the restoration work on “San Francisco 1915 World’s Fair: The Panama-Pacific International Exposition” and “The Sinking of the Titanic: Greatest Disaster at Sea.” 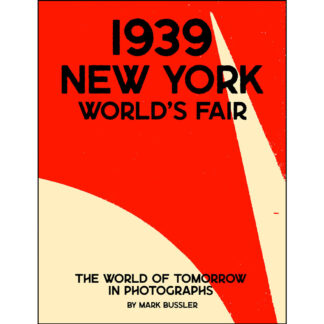