The second volume in a three-volume set filled with hundreds of detailed illustrations from the 1876 Centennial Exposition in Philadelphia.

Originally published in 1876 by Professor Walter Smith, the second volume in the “Masterpieces of the Centennial Exhibition” series takes a dynamic look at late 19th-century artistry, craftsmanship, and industrial design featured at the World’s Fair in Philadelphia, otherwise known as “art applied to industry.”

This profusely illustrated tome of jewelry, furniture, textiles, sculpture, chandeliers, pottery, and metalworking is highly detailed and filled with contemporary critique and analysis from the Exhibition. Those interested in the development of modern industrial design will find this period look at the evolution of American art and craftsmanship, applied to both industrial and commercial designs, thoroughly fascinating.

An art historian digitally scanned and re-mastered each 19th-century image from a priceless pristine copy of the original print. Masterpieces of the Centennial Exhibition 1876 Volume 2: Industrial Art Illustrated Special Edition is presented in the original type font with the author’s intended layout. A new, retro-inspired cover design was created exclusively for this handsome reprinting.

Historians and art enthusiasts alike will find themselves immersed in contemporary writing, period imagery, and a thorough examination of the pieces on display. One can almost imagine that they’re there, soaking in the sights and sounds of the most fabulous party on Earth in 1876. 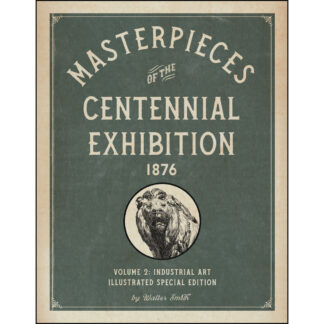