Art in the Gallery of the 1893 World’s Fair: Enlarged Illustrated Special Edition

Just because you missed the World’s Fair of 1893 doesn’t mean that you have to miss celebrating the artwork that was on display in the Palace of Fine Arts.

The World’s Fair of 1893 enthralled millions of 19th-century visitors with electricity, technology, and the Midway Plaisance. It also featured a fantastic collection of art from celebrated painters and sculptors around the world. Originally published in 1893, this rare guide to the artworks featured at the World’s Columbian Exposition was prepared with the sanction and under the direct supervision of the Art Department and Charles M. Kurtz, Assistant Chief of the Art Department.

Some of the celebrated artists featured on display in this guide include:

This guide features more than 300 crisp black and white photographs from the time scanned from an original leather-bound source. The introductory retains the original, classic type font. This special edition printing features enlarged pages, and a new cover design fit for display. Writers and editors at the time organized most of the reprints beside each artist’s name and nationality for easy identification. 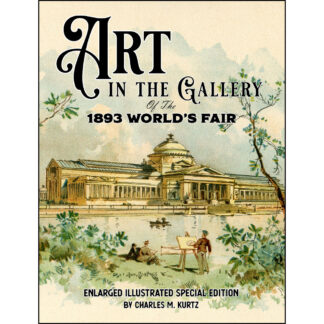 You're viewing: Art in the Gallery of the 1893 World’s Fair: Enlarged Illustrated Special Edition $18.95
Add to cart